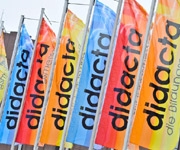 A recent survey conducted on behalf of the Schreibmotorik Institut, Heroldsberg, in cooperation with the Bundeselternrat, makes it clear that even in the digital age, handwriting is still an important educational issue – too many children are having problems with it. The Didacta Association and the Schreibmotorik Institut have now launched the “Handwriting 2020” campaign, which aims to improve the promotion of graphomotor skills.

After the results of the nationwide survey on behalf of the Schreibmotorik Institut and German Union of Teachers [Deutsche Lehrerverband] were published, a nationwide questionnaire put to mothers about the importance of handwriting will undergo qualitative analysis.

At a press conference at the Didacta 2016 trade fair for education and training, the Schreibmotorik Institut and the Bundeselternrat presented the results of a nationwide parent survey along with problem descriptions, causes, correlations, differences and possible courses of action (see detailed document further below): 96 percent believe handwriting to be important; however, over 23 percent admit that their child has trouble writing for more than 30 minutes. Extrapolated to all of Germany, this amounts to 1.2 million children between the ages of six and twelve who cannot write legibly for longer periods and without cramping.

As a result of these problems, the Didacta Association and the Schreibmotorik Institut have now launched the “Handwriting 2020” campaign, which aims to improve the promotion of graphomotor skills in childcare centres and primary schools. Founding members of the alliance, which was introduced during the Didacta press conference, are the Didacta Association and the Schreibmotorik Institut. The Executive board of the Bundeselternrat is supporting the alliance.

Prof. Dr. Wassilios E. Fthenakis, president of the Didacta Association, explained: “Children take great pleasure in movement. For them, movement is a fundamental form of expression just like talking, singing and dancing. Writing is also based on movement, and handwriting promotes children’s motor development and is therefore of essential importance for their overall development.”

Michael Töpler, Chairman of the Bundeselternrat, said at the press conference: “This survey demonstrates clearly that handwriting continues to be very important to parents, represented here by mothers. The children’s existing problems should be precisely analysed and suitable strategies for individual support should be implemented.

Dr Christian Marquardt, the scientific advisor for the Schreibmotorik Institut, said: “The extent of the problems with learning to write is alarming. However, the positive attitude towards handwriting shown by the parents and children is encouraging. Many parents wish to receive more information about how they can support their child in learning handwriting. To this end, the Schreibmotorik Institut will employ informative and exercise materials more intensively.”

It has been proven: more and more children have problems developing “legible, fluid handwriting” over the course of their literacy lessons in primary school. According to estimates by teachers, around half of boys and a third of girls have these problems.

For this reason, the “Handwriting 2020” campaign is taking initiative so that the requirements and opportunities for learning handwriting can be improved both in educational institutions such as childcare centres and schools, and with the family at home.