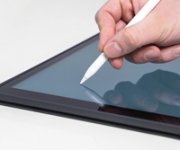 Handwriting in the context of digitalisation

The future is digital. It needs an educational model that puts handwriting in a useful digital context.

The increase in digitalisation is now impossible to stop. And it has lots of advantages: media is continuously developing, it makes our daily lives easier, and a lot of things work more quickly and easily. But with digitalisation comes disadvantages, too: there is less direct personal communication between people and media consumption is increasing, particularly for children and young people.

Media consumption now begins at a very young age. According to the 2017 BLIKK media study, 70 per cent of children of pre-school age use their parents’ smartphones for more than half an hour each day.

According to the 2017 BLIKK media study, there is a link between increased media consumption and development disorders in children. Intensive media use increasingly leads to linguistic development disorders and motor hyperactivity in children up to 6 years of age. The influence of computers, smartphones, internet, etc. on the brain is still unclear from a neuroscientific perspective, and it likely depends on the type, quantity, duration and age (Reinberger, 2016).

Handwriting can be integrated into future digital media

The challenge consists of considering how we can best use media while avoiding the potential negative effects. Writing by hand is and remains one of the most user-friendly forms of human-machine interaction. It is direct, intuitive, versatile and creative and provides many advantages compared to typing on a keyboard, swiping on a tablet or smartphone, or using voice control functions.

Handwriting and digital technology are by no means mutually exclusive. The integration of handwriting into digital media is already apparent in current technological developments that use handwriting as an input method: e.g. interactive whiteboards, augmented paper, tablet and stylus pens, iDrive system.

12 areas of the brain are activated when writing by hand (Planton et al., 2013) and more than 30 muscles and 17 joints work together (Schünke et al., 2005). When processing handwritten text, you also leave a motor memory trace in the brain (Longcamp et al., 2011). Writing by hand therefore provides sustainable support for learning to read and write. In contrast, Professor Kiefer describes typing on a computer as a “meaningless movement”, as there is no connection between the shape of the letter and the corresponding movement. It makes no difference in my brain whether I type A, E or X (Reinberger, 2016).

Unlike typing, writing by hand promotes cognitive development. Writing by hand is therefore absolutely fit for the future, even though writing instruments may change as digitalisation increases. Throughout history, people’s writing instrument of choice has changed again and again: from the cave paintings of the stone age, through writing with styluses and reed pens on wax slabs and papyrus in ancient Rome and ancient Egypt, writing with quills on parchment in the Middle Ages, through various modern writing instruments, to a potential future with digital pens.

The complete publications by the Schreibmotorik Institut

If you want to use information or contents of this article, please cite it as follows: