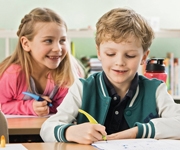 The training of writing motor skills helps: research results of the Schreibmotorik Institut in Didaktik Deutsch.

Scientists from the Schreibmotorik Institut and from the primary stage of the German Didactics faculty at Saarland University presented the results of a one-year intervention study of first-year pupils, the biannual publication for the didactics of the German language and literature. This study was carried out in the 2014/2015 school year among 102 first-year pupils (six classes from four different regular primary schools). The intervention group became special writing motor support during their first writing lessons, whereas the control group became regular writing lessons. Writing movements were recorded with the help of a graphics tablet.

Results show that the writing motor skills training had a positive effect. At the end of the school year, the intervention group was more advanced when it came to handwriting speed and pressure when compared with the control group. Just one hour per week was enough to result in these benefits.