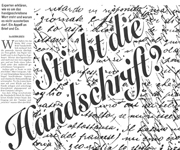 “Is handwriting about to die out?” – The Schreibmotorik Institut in the newspaper Berliner Kurier

Dr. Christian Marquardt together with other experts explains in the newspaper Berliner Kurier from December 7th 2014 how the handwritten word is doing and why it mustn't die out.

The Article by Katrin Groth starts by questioning the reader when he or she wrote a handwritten letter the last time. When was that again? Even if a letter is more personal, an email is faster and more practical: no paper and envelope needed, no ugly crossing out of errors, no postage and one doesn't have to walk to the postbox. But handwriting serves other purposes. The pen in hand helps children to understand and compose longer texts. Studies found out that children as well as adults remember handwritten facts better.

Experts warn against abolishing handwriting at schools, as it is partly happening in Norway and the USA. Just as Guido Nottbusch, professor for primary school pedagogy German at Potsdam university in the article: “It is easier to grasp letters by means of motor skills. Especially for learning to compose texts, it is better to write by hand.”

But how can schools and teachers act on the fact that after an estimation by the German Teacher's Association, the percentage of those who write badly and illegible varies between 20 and 50 percent, depending on age, region and type of school? For Dr. Christian Marquardt the problem lies within the fact that one generally always talks about script and not about writing itself: “You have to distinguish between the result – what is written on the paper – and the motor skill actions which are necessary for that.” Children thus should not only learn how script should look like. They should rather gain the freedom to approach the form in their own manner. With more motor skill exercises it is easier for children to develop good handwriting. Beyond school it is then up to them if they want to write something by hand or with the help of a keyboard.