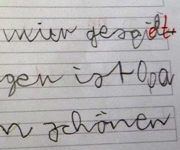 Even in the digital age, handwriting remains an important educational issue. The majority of pupils have problems with it. Here, expert Dr. Marianela Diaz Meyer suggests possible causes.

In a national teachers’ survey conducted by the Schreibmotorik Institut in cooperation with the German Union of Teachers [Deutscher Lehrerverband] in 2015, almost 80 percent of the 2000+ teachers who participated stated that on average their pupils’ handwriting had deteriorated.

Teachers and educators would like to take preventive measures. However, Dr. Marianela Diaz Meyer considers it a major problem that “didactics/writing” has been abolished as a compulsory subject for trainee teachers. According to Dr. Diaz Meyer, the compulsory teaching of handwriting should be reintroduced and also firmly embedded in the school curriculum.

She went on to say that the importance of handwriting is generally overlooked and many children are having ergonomic problems: “Children cramp their hands, they have a poor pen hold and their sitting posture is also often incorrect.” This is all in addition to digitalisation: “Children’s living environments have changed a lot with mobile phones and laptops.”

Published in:
The Nürnberger Nachrichten newspaper, Schwäbische Zeitung newspaper
among others