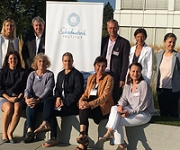 Along with five project partners from Germany, Austria and Italy, the Schreibmotorik Institut will conduct a European research project within the framework of ERASMUS+. In the next two years, concrete didactic approaches and teaching aids will be developed and tested for the promotion of writing skills in schools. 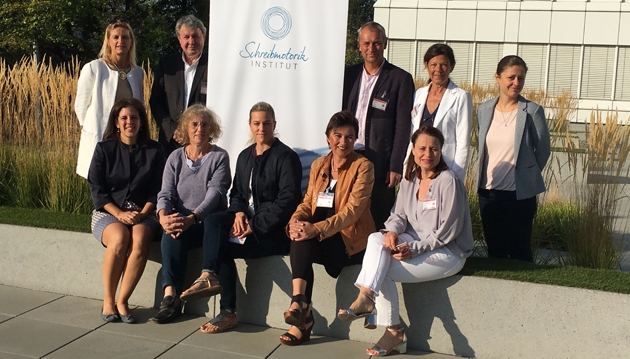 The HS-Tutorials EU project will contribute to achieving the core objectives of the Europe 2020 strategy. The project partners visited the Schreibmotorik Institut in Heroldsberg on 17 and 18 September for a two-day launch event. The project will be financially supported by the European Commission.*

The aim of the project is to promote legible, efficient, fluid and fatigue-free penmanship for primary school children and to create the requirements for writing motor skills in child daycare centres. Aside from the Schreibmotorik Institut, project partners include: the Government of Central Franconia [Regierung von Mittelfranken], Ideum (Austria), the German Education Directorate of the Autonomous Province of Bolzano [Deutsche Bildungsdirektion der Autonomen Provinz Bozen] (Italy), the Styrian Educational Board [Bildungsdirektion Steiermark] (Austria) and the Government of Lower Bavaria [Regierung von Niederbayern].

The EU project is aimed at primary school teachers and nursery staff. Decision-makers in the education sector will also be made aware of the importance of good handwriting in terms of educational opportunities. Children should be helped and supported with handwriting acquisition from an early age, and any emerging problems should also be recognised early on.

Children’s writing skills in school, as well as in the transition from nursery to primary school will be promoted in the framework of the EU project with the help of innovative, field-tested online tutorials and handouts for teachers. The multipliers trained as part of the project will offer further project training for colleagues after the project has come to an end. Findings from research on handwriting – and writing motor skills in particular – are thus integrated into teacher training and applied in practice.

The project addresses this problem

Many primary school teachers feel insufficiently prepared when it comes to teaching handwriting. The teachers’ survey conducted by the Schreibmotorik Institut and the German Union of Teachers [Deutscher Lehrerverband] in 2015 demonstrated that a large proportion of children have difficulty with handwriting acquisition. Almost two thirds of pupils in secondary schools cannot write for more than 30 minutes without complaint. They are thus at a disadvantage in their educational efforts, because proficient writing skills are a key competence for lifelong learning and social participation. In the long term, it is apparent that 11% of European school leavers leave school without any qualifications (as of 2016, according to the EU statistical office), many of whom have poor literacy skills.

*This project has been funded with support from the European Commission. This publication [communication] reflects the views only of the author, and the Commission cannot be held responsible for any use which may be made of the information contained therein.