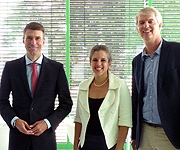 The “Handwriting 2020” campaign for the promotion of writing motor skills gets political backing: “We want to do everything we can to support this important initiative”, said Parliamentary State Secretary to the Federal Minister of Education and Research Stefan Müller during his visit to the Schreibmotorik Institut, Heroldsberg, one of the founders of the Handwriting campaign. 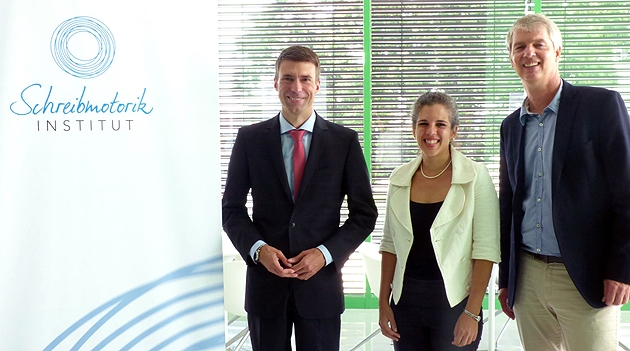 “Even in the digital age, the basic skill of handwriting remains an important educational issue,” said State Secretary Müller, emphasising how important handwriting is in everyday working life. He says that, at the ministry, he writes by hand even more than he used to, which is partly due to the customary processes there. Personal comments on memos that have to go through several levels would not be conceivable without handwritten notes.

Whilst the development of legible, flowing handwriting is still part of nationwide educational standards, a growing number of children have problems meeting this requirement. This is revealed in the results of surveys on the writing skills of pupils, completed by teachers and parents and carried out by the Schreibmotorik Institut in cooperation with the Deutsche Lehrerverband [German Union of Teachers], or the Bundeselternrat [German Federal Parents Council]. According to these surveys, more than 30% of girls and over 50% of boys have difficulties developing legible and flowing handwriting. Dr. Marianela Diaz Meyer, head of the Schreibmotorik Institut, pointed this out in a discussion with State Secretary Müller and highlighted the possible negative consequences, namely restricted educational opportunities. Neuroscientific findings indicate that there is a close correlation between the cognitive and motor development of children. Almost all of the teachers surveyed have this impression, too. They also suspect a correlation between the handwriting skills of their pupils and their performance at school.

“That’s why we encourage dialogue between science and practice, for example with the International Symposium on Handwriting Skills,” says Dr. Diaz Meyer. This year, the symposium, which will be held on 10 November in Darmstadt, will focus on the consequences and opportunities offered by digitalisation in connection with handwriting. In previous years, the event has facilitated an exchange of knowledge between figures from science, education, health and politics from eight European countries. The symposium is also part of the “Handwriting 2020” campaign, which was launched by the Schreibmotorik Institut in cooperation with the Didacta Association of the German Education Industry in 2016. The goal of the initiative is to improve the requirements and opportunities for learning handwriting in childcare centres and schools, and with the family at home. “In line with the institute’s motto,” said Dr Diaz Meyer, “children should have better opportunities to learn how to write quickly and legibly without getting tired.”

The non-profit Schreibmotorik Institut has been tackling the issue of handwriting since as early as 2012. “We have worked extremely intensively for many years to ensure an important foundation for early intervention in promoting basic skills and preparing pupils to learn to write in the future,” says Sebastian Schwanhäußer, initiator and executive director of the institute. Schwanhäußer emphasised to State Secretary Müller that he expects the support of politicians: “As a father, I know that learning to write is a highly complex process. That’s why I am campaigning all the more strongly for both - the research and practice of learning to write to be further developed for our children. This also includes the development of opportunities for combining digital learning with the promotion of motor skills. It is all the more important, therefore, that politicians also give us their attention and support.” The “Handwriting 2020” campaign is set to receive just that in future, as assured by Parliamentary State Secretary Müller. He was surprised by “the recent research findings, the extensive work done by the institute and the widespread measures to raise awareness among the public,” and promised: “We want to do everything we can to support this important initiative.” Müller has already made a start on this in private, and intends to try out some very simple and practical tips to improve handwriting with his daughter.