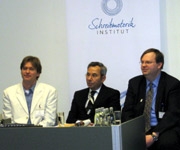 The immense media response and coverage of the parent survey on problems with handwriting presented at the Didacta trade fair for education and training proves: handwriting is and will remain a very important educational issue.

The Schreibmotorik Institut and the Bundeselternrat [German Federal Parents Council] presented the results of a nationwide parent survey at the Didacta 2016 trade fair for education and training. In addition, the Schreibmotorik Institut and the Didacta Association announced the joint launch of the “Handwriting 2020” campaign to improve the promotion of graphomotor skills. The Executive board of the Bundeselternrat are supporting the alliance.

The media response in TV, radio, print and online was enormous – numerous media representatives reported on the parent survey and the handwriting campaign, including the ZDF heute-journal and Deutschlandradio Kultur. A host of newspaper and online articles were also written on the topic, for example on ZEIT Online, sueddeutsche.de and WDR.de.

Press conference at the Didacta 2016 trade fair for education and training held by the Schreibmotorik Institut, Bundeselternrat and the Didacta Association with the presentation of the national parent survey and the “Handwriting 2020” campaign.