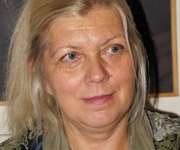 Compared to before, there are hardly any conscious attempts to convert left-handers. Left-handedness has become normalised. But does that also mean people are dealing with it correctly? And how can the problems left-handers are confronted with be prevented? An interview with Dr. Johanna Barbara Sattler, a psychologist, psychotherapist and director of the first German advice centre for left-handers and converted left-handers.

Are today’s educators better prepared to deal with left-handed children?

Left-handers are no longer converted in the way they were previously. The problem nowadays is children who convert themselves very early on by imitating and modelling themselves on their peers and therefore adapt to a right-handed environment. This requires parents, educators, but also paediatricians to be vigilant. Particularly in the case of paediatricians, it is very much dependent on the individual doctor whether he or she understands handedness in children and properly informs the parents. In the medical advice booklet that every mother receives after their child is born, handedness is unfortunately not mentioned at all. Dealing with left-handedness is not considered in many educational plans for nurseries and preschools either, or in the competency-based curricula for teacher training. It is therefore extremely dependent on the educator’s individual expertise, individual experience of the issue and the findings and experiences they have had in training sessions.

Why is it so important that educators understand the issue?

People need to pay particular attention to the issue very early on so that children are not accidentally converted and can instead remain left-handed, prepared as well as possible for writing with their left hand. Educators and parents should know: leave the child to develop in peace; monitor, but do not talk about it and give a left-handed child the appropriate everyday objects for them to use. You do not need to do anything more than that, but this is important. The development of a child’s handedness should already be monitored before they start preschool, but in preschool in particular educators should make sure that they should place items in front of children centrally, provide left-handed scissors and pencil sharpeners where the child can turn the pencil in the opposite direction, and make sure they are able to instruct the children in how to use left-handed products. For example, a left-hander would cut a spiral in the opposite direction. It is important that coloured pens and wax crayons are triangular in shape so that children can learn the three-point grip better and that the coloured pens are soft and of good quality. Left-handers should also be trained to use the correct, diagonal page orientation. If left-handed children have already been drawing and writing their first letters under their own steam and unassisted in preschool, it is very late to then change their writing posture at school, and suggested changes to their writing posture and pen hold are rarely taken on board. 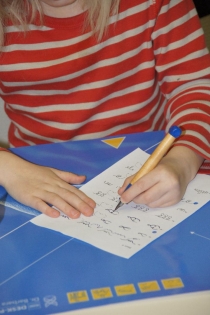 The problem does not just arise when children start writing then, but earlier when drawing?

Particularly when children are very adept before they begin school and are already able to write many letters, they have mostly already developed and automated a quite sub-optimal writing posture, and these children then have big problems changing it in school. I also believe that fountain pens are introduced too late at school. Left-handers need pens that smudge from the start. If children experienced this when they start learning to write, they would adopt strategies suitable for left-handers more easily, such as placing the worksheet at an angle, and also accept and integrate these strategies more easily based on their experiences. In terms of writing motor skills, however, left-handers develop in exactly the same way as right-handers, as Dr. Christian Marquardt and I found in a comprehensive study between 2003 and 2007*.

What are the consequences of left-handers using work materials for right-handers?

I am at a disadvantage if I have the wrong work materials and am repeatedly unable to do things with my dominant hand in an ergonomically appropriate manner. It takes me a bit longer, it is more effort and is clumsier. And for left-handers, that often comes clearly from their environment in addition to their own feelings of insecurity. All everyday objects, workstations for adults, computer workstations for school pupils, but also toys for children are designed for right-handers. The handles on toy diggers, for example, are typically on the right-hand side. Left-handers then tend to say “ah, it’s ok”. They are used to it and they do not have any other option. But why should someone have to use their less dominant hand all day? That does not make sense ergonomically. And it can lead to frustrations, to actual clumsiness, to lower motivation when playing, drawing and writing and to constant overexertion, requiring them to adapt.

Dr. Sattler, herself left-handed, has studied the phenomenon of handedness in society, art and culture and its medical and psychological significance for over 30 years, and is considered a leading expert in this area. In 1985, the “Consulting and information center for left-handers and converted left-handers” was founded in Munich, and Dr. Sattler has been director from the very start. This advice centre is also the centre of a network of experts, advice centres and self-help initiatives in the field of educations, therapy and medicine.

Research and development of educational materials and literature have been a focus of its work from the very start. To that end, in 1993 the handout “The left-handed child in primary school”, commissioned by the Bayerisches Kultusministerium [Bavarian Ministry of Education and Cultural Affairs], was published. The handbook is now in its 16th edition and influences how left-handedness is treated in curricula in Bavaria and other German states.