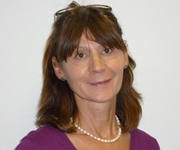 Children often start primary school with very different ways of holding a pen. At this stage it is already almost too late to ensure that they hold a pen properly. Alongside other factors, it forms the basis for good writing motor skills, as writing involves coordination of the fingers, wrist and arm. For example, too strong a grip can have an effect on all other movements. What’s more, bad habits are difficult to break. An interview with occupational and handwriting therapist Waltraud Fürholzer about how to hold a pen properly, finger mobility and the joy of experimenting.

Why is it so important to hold the pen properly when writing?

Holding the pen properly is a key prerequisite for learning to write well. Of course, there’s more to it than that. Writing is influenced by a range of mutually dependent factors. Posture also has a major role to play, as does the mobility of the fingers. A good grasp of the pen ensures that the fingers are able to move freely whilst writing. If this mobility is restricted by a poor grasp of the pen, it makes writing more difficult and causes cramping, jerky movements and messy handwriting.

What are the characteristics of good pen grip?

34 possible ways of holding a pen have been identified so far. The most favourable is generally considered to be the tripod grasp, whereby the pen is held between the thumb and index finger and rests gently on the middle finger. It is important for the thumb and index finger to form an axis. When working with children, you should observe how they position their fingers, which fingers they use, how firmly their fingers are gripping the pen and whether their fingers are still able to move. In the tripod grasp the two outer fingers are bent in; they aren’t used at all. To achieve this favourable grip, you can, for example, give the child little balls of wool to put between these two fingers to keep them occupied, allowing the other three to concentrate on holding the pen. A four-finger grasp can also be perfectly appropriate if the child has sufficient finger mobility.

When should you begin to pay attention to proper pen holding?

An incorrect pen grip is very difficult to correct, so it should be worked on as early as nursery school. It is noticeable that boys have greater difficulties than girls. I would recommend choosing topics especially for boys – e.g. spaceships or knights’ castles. Children should enjoy experimenting with a paper and pens. Increased attention should be paid to how children hold pens and pencils at preschool age at the latest. Before that, children can hold them any way they like. The teacher can keep showing the children how you hold a pen. It is, however, not recommended that they say to say to the child “No, do it differently please” or “This is the right way”. This tends to lead to stubborn reactions.

Can you give us an example from your therapeutic work?

I work in diagnostics at Kinderzentrum München, a sociopaediatric centre in Munich. A recent case that I had in the handwriting lab was a child in year five who was experiencing pain when writing. The boy was having difficulties moving his fingers. He had a tripod grip, but not a particularly good one. His thumb kept slipping down to his index finger and he was pressing too hard on the pen. Together with his mother we tried out various things: What happens on the paper if the fingers are extended whilst gripping the pen; what happens if they are retracted? What happens if the pen is pressed down hard, putting weight on the pen? We got the child take the pen in his hand and asked: how much does it weigh? It doesn’t need to be held tightly because it’s very light. What happens if hardly any force is applied? The child was very motivated. After all, he wanted the pain to go away. We only practised for seven minutes and already it was clear that he would be able to make a change himself.

Waltraud Fürholzer is occupational therapist and writing therapist of Prof. Mai. She has been a therapist for writing disorders in neurological rehabilitation for many years, and has been working as a therapist for hand motor skill problems in children in the handwriting lab at Kinderzentrum München since 2016. She supervises occupational therapy research work and offers seminars on “writing training”. She has also published several journal articles on the topic of “writing diagnostics and therapy according to Prof. Mai and Dr. Marquardt”.