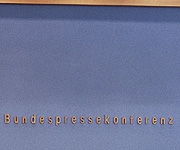 Federal Press Conference: The German Union of Teachers and the Schreibmotorik Institut present the results of a nationwide survey of teachers

A press conference on “Problems with handwriting – consequences also for school policy in Germany“ took place in the building of the Federal Press Conference in Berlin on April 1st. Josef Kraus, president of the German Union of Teachers (Deutscher Lehrerverband, DL) and Dr. Christian Marquardt, scientific advisory committee member of the Schreibmotorik Institut presented the results of the survey among teachers. It reveals: Problems with handwriting at school are increasing.

According to teachers who participated in the survey, half of all boys (51 per cent) and a third of girls (31 per cent) have problems with handwriting. And it affects a majority of pupils: more than half of secondary school teachers surveyed noted as many as 38 per cent of pupils were unable to write for 30 minutes or longer without problems.